On the first Sunday of every month my family has a potluck dinner.  I really wanted to make something for dessert, but because Betty's oven was hard at work cooking a turkey, I needed to find something I could cook in the well.

The Thermowell works like a slow cooker but with the addition of the Thermobaker, it can also be used as a small oven.


I whipped out my handy-dandy 1950 copy of the Idle Hour Cook Book - the recipe book and user manual for the Chambers ranges - and looked for potential pie recipes, finally settling on Raisin Pie. 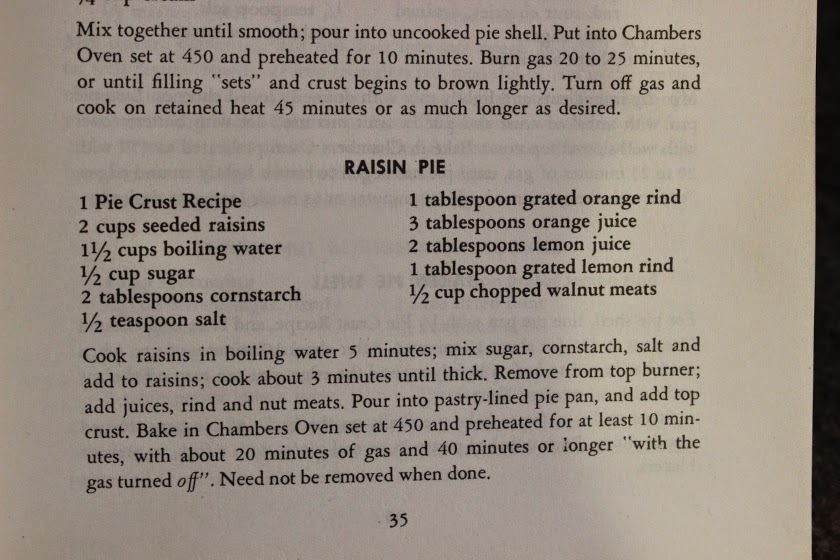 To make a smaller pie for the well, I halved the recipe.  Instead of a double crust pie, I thought it would be good to top the filling with an oatmeal crumb topping from one of Farm Boy's mother's famous recipes, Raisin Mumbles.  Mostly I thought this because I only had enough pie crust made for a single crust pie, but I also thought it sounded tasty.

While assembling the ingredients, I discovered that the lemons that I was sure were in the crisper were, in fact, limes.  I considered using lime juice in place of the lemon, but in the end I used dark rum instead.  Rum is a good substitute for lemon, right?

After cooking the raisins, I had some doubts about there being enough filling, so I went ahead and kept the full amount (1/2 cup) of walnuts.

Hmmm...  I'm beginning to see a theme in my cooking: I don't know what I have on hand and I substitute willy-nilly...


This was a hit at the potluck and only a tiny bit made it home with us.  I see breakfast pie in my future!

Stir together the topping ingredients and drop in small bits over the top of the pie filling. The topping will come together as it bakes.

I haven't tried baking this in a regular oven, but based on other recipes, I would bake it for 20 minutes at 425F, then lower the heat to 350F and bake for 20 to 30 more minutes, checking it at 20 minutes.


* Both the well and the oven on a Chambers are heavily insulated, so after a prescribed amount of heating time, you turn the gas off and let the food finish cooking with retained heat.
Posted by The Nostalgic Cook at 6:11 PM