I had a couple of sweet potatoes that needed to be used, but I didn't want to just bake them like I normally do.  Growing up, I had only had plain baked sweet potatoes and always liked them.  Farm Boy had only been served the really sweet ones with marshmallows* on top and he hated them. I finally talked him into trying a sweet potato fry and he was all over it.  I'm pretty sure he heard bells ringing and romantic music playing, he liked it so much.


*Is that a thing outside of the southern U.S.?  My parents moved here from North Dakota (Nor-da-KO-ta), so most of my childhood food experiences were of the Midwestern variety.

Since I was already looking something up in my Idle Hour Cook Book, I checked for sweet potato recipes and found Malaga Sweet Potatoes. 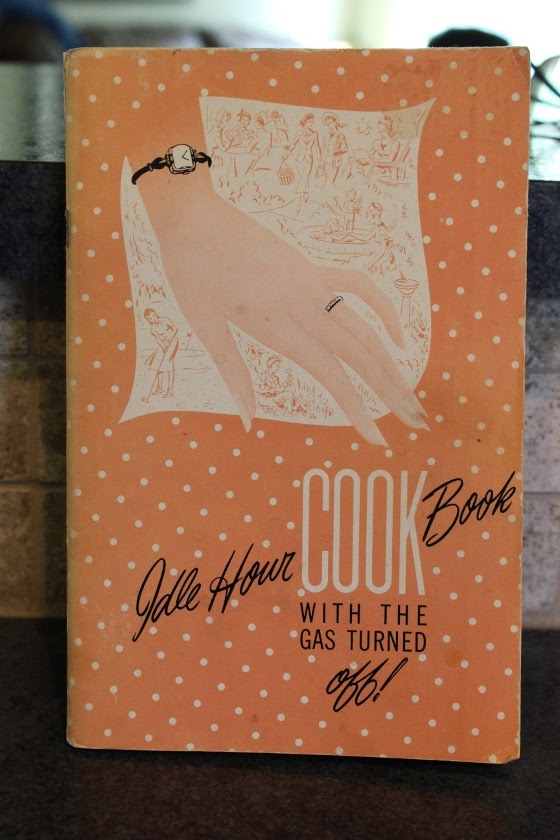 I didn't have any grapes, but I did have raisins and raisins are just really sad grapes, right?  So I poured some boiling water over some raisins and proceeded like it was meant to be.

A recurring theme in my cooking life is that if a recipe calls for both raisins and nuts, I am going to leave one of them out.  I can't tell you how many times I've pulled cinnamon rolls, cookies, etc., out of the oven and then noticed the bowl of raisins or pecans waiting patiently on the counter. At that point, foul language is used.


I didn't peel the sweet potatoes because I thought the skin made them a little easier to work with.  Farm Boy always eats the skin, but I just scrape the the flesh away from the skin when I eat them.  (Hmmm... that sounds a little Silence of the Lambsish... perhaps I should have an old friend for dinner...)

We liked these.  They were sweet without being overpoweringly sweet, although the raisins did dry out a little more than I would have liked.  I'm having a hard time imagining what it would be like cooked with grapes instead of raisins (does baking them just turn them into raisins?), so I might have to try it the way it was originally written.  And maybe I can overcome my mental raisin/nut hurdle if I trick myself by using grapes.  But after so many failed attempts, I have my doubts.

Ingredients:
3 or 4 large sweet potatoes
salt and pepper
white grapes (or raisins, if you want to be like me)
brown sugar
butter
chopped nuts

Directions:
Scrub sweet potatoes and steam or bake until tender.  Peel (or not!) and cut in half lengthwise; scoop out a small amount of the flesh from each half to make a boat shape.  Place halves on baking pan and season with salt and pepper to taste.  Fill each section with grapes; sprinkle with 2 tablespoons brown sugar and dot with 1/2 tablespoon of butter; sprinkle with chopped nuts.

Or if cooking with a Chambers, bake at 450F for 15 minutes and retained heat for 30 minutes or up to several hours, if needed.
Posted by The Nostalgic Cook at 10:57 AM