This little book has been in the bookshelf for a while, but hasn't had much - if any - use.  I told Farm Boy that he could help it earn its keep by choosing between two recipes: Sweet Potato Biscuit and Variety Corn-Cake. 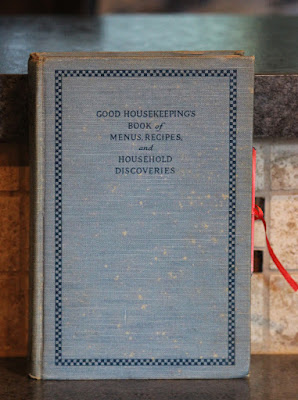 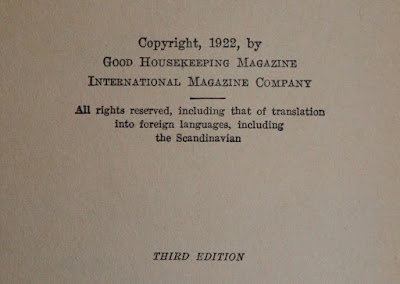 Fortunately for me, he chose Variety Corn-Cake.  I say 'fortunately' because after reading through the biscuit recipe, it seemed like kind of a pain to make.

Variety, as it turns out, means coconut (and a boatload of baking powder). As I've said before, I am all about the coconut, so I was excited to try this.  Reading through the recipe, it seemed like a pretty standard cornbread recipe, except it is fairly sweet and contains no eggs.

My slight deviations from the recipe: I used unsweetened coconut and baked it in an 8" cast iron skillet, (a #6 Wagner).  I also placed the pan in the oven while it was heating.  Just before baking, I added about a tablespoon of butter to the pan to melt before pouring in the batter.  This makes for some crusty goodness.

So let me just explain the greige-ness of the following photos...  The last time I purchased cornmeal, my choices were a blue cornmeal milled and packaged by a local company or a yellow cornmeal that is labeled as "medium grind" that I know from past experience is really better suited for use as concrete aggregate than for eating.  So I chose blue.  And let me tell you, it is the best tasting cornmeal I have ever had!  It has a really nice, intense corn flavor and is much softer than the gravel yellow cornmeal.  But I haven't quite adapted to the color.

I had some concern that it would be a crumbly mess without the egg, but while it is slightly more crumbly than a standard cornmeal, the overall texture is very light and fluffy.  The flavor of the unsweetened coconut really came through.  I think a sweetened coconut would be too much, although you might be able to cut the sugar a bit, if that's all you had.  I also now think you could add some sugar and coconut to any regular cornbread recipe and get something pretty tasty.

Farm Boy and I both really liked this.  It was good warm, cold and even waffled!  With lots of butter and honey, of course.  We will definitely have this one again.

Posted by The Nostalgic Cook at 3:20 PM No comments:

Apparently the Canadian weather decided to take a vacation here in Texas!  We had around 8" of snow, followed by several inches of sleet/freezing rain and several days of below freezing, all the way down to -1F one morning.  I know that a lot of the world deals with this every winter, but in this part of Texas we don't.  Normally we get maybe one snow per year.  We shut everything down, ooh and ahhh for a day, then it melts by late afternoon.  This snow/ice combo overstayed its welcome!

We were fortunate that we didn't lose electricity or water, like so many people did.  And we were very happy that one of the extras we decided on when we built this house was a wood-burning stove.  The cats were also pretty happy about that choice during all this! 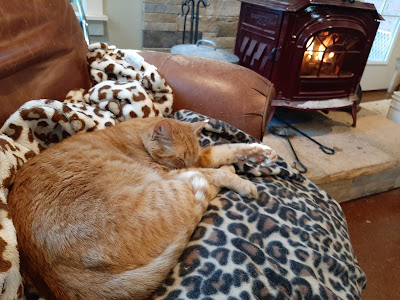 Another thing we were happy about is that our Chambers stove uses propane.  We had just had the tank filled, so we were able to cook without worrying about using too much electricity.  And as cold as it was, I was looking for any excuse to turn on the oven. 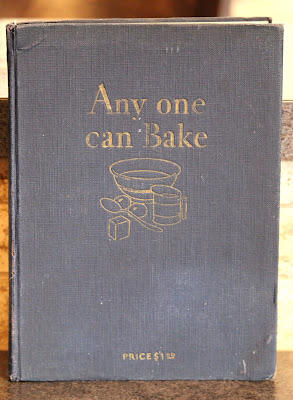 One one of the coldest evenings, I was making some soup and looking for something to go with it.  I pried this gem, Any one can Bake by the Royal Baking Powder Co. (1929) out of the overstuffed bookshelf and spotted the recipe for popovers, which start with the oven at 450F.  Yes, sign me up!

I don't remember how I acquired this book, but I do remember thinking that for an older book, the quality seems to be really high - glossy paper for the pages, a lot of (charming) color illustrations.  The outside of my particular copy has taken a beating, but the pages are pristine. 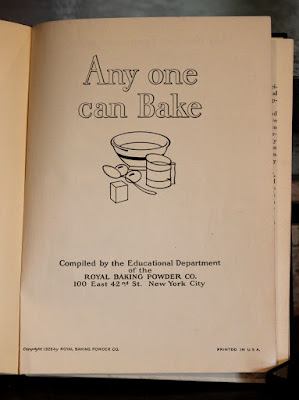 The recipe says it makes six popovers, but it filled nine of the eleven cups (11?  why 11??) of my cast iron muffin pan.  I wasn't sure how full I could fill them without the batter running over, but I think I could have gone a little higher. 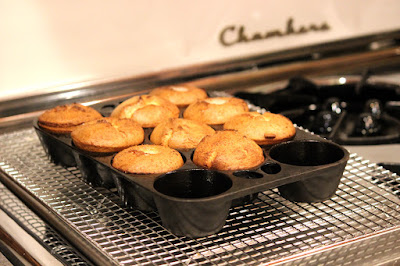 This is the first recipe I have tried from this book.  Since we were pleased with the results and there are quite a few other recipes that look promising, it will be bringing it out again.

Posted by The Nostalgic Cook at 3:28 PM No comments:

Email ThisBlogThis!Share to TwitterShare to FacebookShare to Pinterest
Labels: 1929 Any one can Bake

This little cookbook, Our Favorite Recipes by the Abilene School Food Service Association, belonged to my mother-in-law.  Since her mother-in-law was a teacher in Abilene at one time, I'm guessing that's who originally gave it to her, but there is nothing to note that.  Nor does it have a date or an explanation of why it was published.  It only contains 64 pages, but it's made of a stiff, highly textured paper that makes it hard to open.  The outside cover is stained, but the inside pages are pristine, so I don't think it saw a lot of use.

I was in the mood to bake something the other day, but not in the mood to put a lot of effort into it.  After flipping through a few other cookbooks, I pulled this one out and found something that suited my needs: Hedge Hogs by Mrs. Cliff Landers. 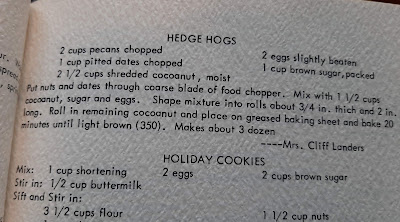 There is a food grinder somewhere in this house, but it seemed like a food processor would work just fine and would also let me make it in one container.  Yay for even less effort!
Mine look more like feral hogs than hedgehogs, but they are quite nice in flavor and texture.  They are dense and chewy, somewhere between an energy bar and candy, flavored strongly of dates and brown sugar with a hint of coconut.  I gave my sister a few and she asked for the recipe and baked her own batch the next day, so I would say this is a keeper of a recipe!
Posted by The Nostalgic Cook at 3:19 PM 6 comments: