Grab those forks, it's time for pie!

To recap the rules of Pieathalon:

My contribution to Pieathalon was a Farm Boy family favorite, Osgood Pie. I was trying to play nice this year, so hopefully the recipient likes pies with nuts and raisins!

My pie to bake comes from battenburgbelle at  Kitchen Confidence.  The recipe, La Tarte au Petit Suisse, comes from French Country Cooking by Elizabeth David, originally published in 1951 and still in print as recently as 2013.  After reading reviews online and trying this recipe, I am sorely tempted to buy a copy for myself.  Because I need another cookbook! 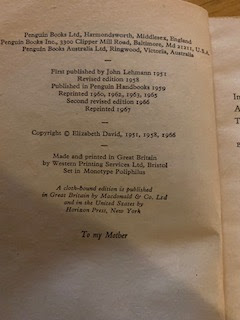 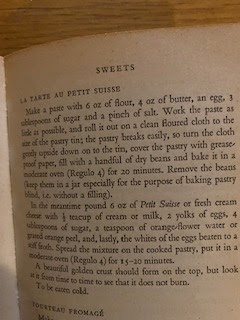 Pie pastry is my culinary nemesis, mostly because I get such inconsistent results.  I considered using a refrigerated pie crust, but since this recipe included a recipe for the crust (or paste) and I was feeling brave, I decided to give it a go.  I did have a purchased pie crust in the refrigerator (along with a beer), just in case things went sideways.

The recipe calls for blind baking the pastry and recommends keeping a jar of dried beans on hand to use as weights for this purpose.  As it happens, I have been using the same old pinto beans for years, although mine are in a plastic bag, not a nice jar.  Farm Boy is of the opinion that they are still edible, but I have serious doubts about that.

The recipe calls for Petit Suisse cheese, which I could not find.  Some Google searching suggested that I could substitute cream cheese thinned with a little milk.  I chose to use buttermilk, to add a little more flavor.  I also used orange zest in place of the orange flower water, as suggested in the recipe.

It took significantly longer to bake than the 15 to 20 minutes listed in the recipe.  I would say it was closer to 40 minutes before it started developing some browned bits on the top.  By the end, it had puffed up dramatically and smelled divine!

The puffiness didn't last long, though. By serving time, it was much thinner. 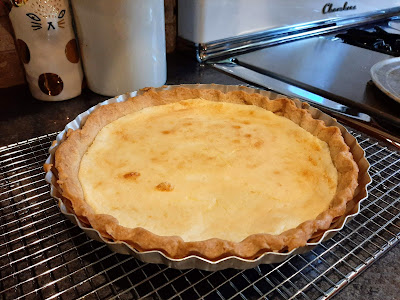 Pie baking day was also Serafina's birthday, or rather her found day.  She was found as a 3 week old kitten in someone's yard.  Our vet's office apparently keeps a list of gullible people and immediately called us.  How could we say no to this face? 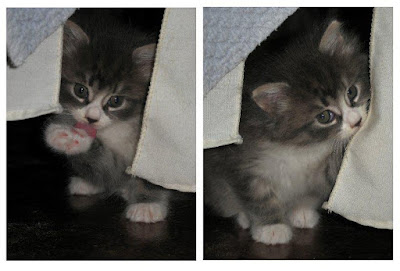 I showed her the pie and sang happy birthday to her.  She was not impressed.  For all that floofiness, she can be a harsh critic sometimes.

By serving time, the pie was really thin, but great googley-moogley it was good!  It is lightly sweet, really creamy, with just a hint of orange, but the crust is what really makes it.  It is completely different than a normal pie crust.  It is thin and crunchy, reminiscent of a Norwegian krumkake or a pizzelle.

All of the taste testers liked this pie, including Queen Lily.  I gave her a tiny bit first, then had to eat the rest of my piece while holding her back with one arm.  Someone around here has taught her some bad habits.

Thanks to Yinzerella at Dinner is Served 1972 for another fun Pieathalon!

You can read about all the other fabulous Pieathalon pies at the links below:

Osgood Pie at A Book of Cookrye

Tarte a l’Orange at Recipes 4 Rebels

Save Your Marriage Meat Pie at Dr. Bobb's Kitschen

Mahogany Pie at Dinner is Served 1972