Several years ago I stumbled on a book sale at the local library on the last day of the sale.  You could buy an entire bag full of books for something like two dollars, but the only thing I found that looked interesting to me was a battered 1970s edition of The Settlement Cookbook.  I think it might have been a book club edition because it was very compact with extremely small print.  Some of the recipes looked interesting, but it was so tedious to read that I never used it.

A few months back, I came across a much nicer 1965 edition.  It is also a book club edition, but it is much easier to read (and has much less tape holding it together).  Since the librarian had made me a good deal (twenty-five cents) on the original book sale copy, I felt like I could justify spending one whole dollar on this much nicer copy. (Have I ever mentioned that I am cheap??) 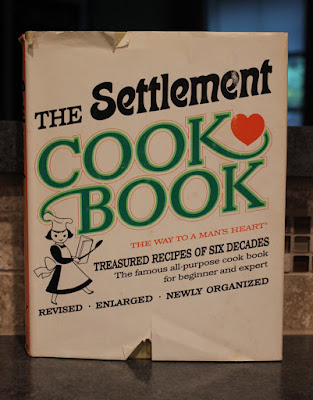 After buying this copy, my sister lent me the book, A Thousand Years Over a Hot Stove, which is a history of how women have cooked and lived in North America from the time of the Native Americans through the early 2000s.  The Settlement Cookbook was mentioned as having been originally published in the early 1900s as a cooking textbook for new Jewish immigrants at Milwaukee's Settlement House and it still remains the best-selling charitable cookbook of all time.  Fun fact!

I wanted to make something for a potluck dessert last week.  After flipping through several books, I noticed this recipe for Chocolate Toffee Bars and thought it met my requirements of 1) chocolate and 2) easy. 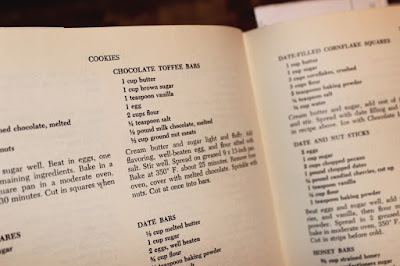 Since I didn't want a 9x13" pan of bars to tempt me for the rest of the week, I decided to halve the recipe, using another recipe on the same page for baking guidance.  Melting the chocolate also seemed like too much work, so I baked the bars partially, then sprinkled chocolate chips on top and returned them to the oven for a few more minutes, then used a spoon to spread the melted chocolate around.  Melting the chocolate first would have resulted in a smoother chocolate topping, but once the walnuts were sprinkled on top, you couldn't really see the texture of the chocolate anyway.  Laziness for the win! 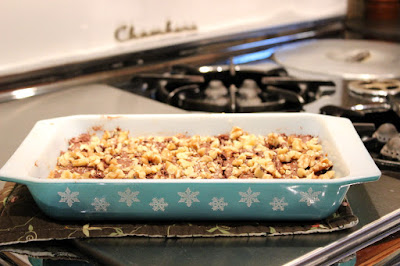 These were very tasty, although softer than I expected.  They are also very rich, so I suggest cutting them into tiny bars.  One made it home with me and I had it for second breakfast the next day.  I thought it was even better then, which made me sad that I had given the rest away!

Directions
Cream butter and sugar until light and fluffy.  Add vanilla, well-beaten egg, flour and salt.  Mix well.  Spread in greased 8" square pan (or equivalent).  Bake at 350F for 15 minutes.  Sprinkle with chocolate chips.  Return to oven and bake for 5 more minutes or until chocolate chips are soft.  Smooth the chocolate chips with a knife or the back of a spoon, then sprinkle with chopped nuts.  Cut at once into bars, then cool.
Posted by The Nostalgic Cook at 4:39 PM 4 comments: