One of Farm Boy's friends gifted us with some home grown apples a few weeks ago, which is not something we see a lot of here in Texas. (Thanks John Boy!)  He doesn't know what kind they are - the tree was there when he bought the house - but he said they were good for both fresh eating and baking.  So, being good gift receivers, we did a little of both! 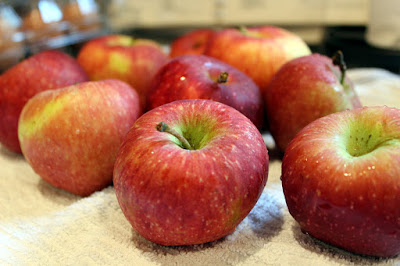 Since I hadn't posted anything from this book yet, I decided to see what it had to offer for apple recipes.

As an aside, this book is a reminder of The Chambers that Got Away.  It was at an estate sale, in pristine condition and had all the do-dads for the Thermowell.  I put a bid on it, but didn't win.  <insert dramatic sigh here>  In the end, I found my Betty, but she needed a lot more work than TCtGA would have required.

Despite the fact that I'm pretty sure it should be Knobby, I settled on Nobby Apple Cake, because it looked easy.  The lack of the K really bothers me, though.  Obsess much?  Yes, yes I do. 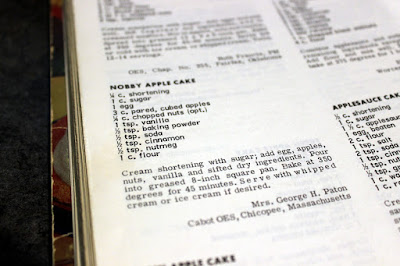 As I guessed, it was easy to make.  The hardest part was spreading the batter around the baking dish.  "Pour the batter" is a very optimistic phrase for this batter.  It's very stiff and just barely enough to coat the apples.

However, it puffs up quite a bit during baking.  Ta da!

I hated anything with cooked apples as a kid and now I can't get enough of them.  We ate this dusted with powdered sugar and cinnamon, but a nice dollop of whipped cream would have been perfect with it, too. 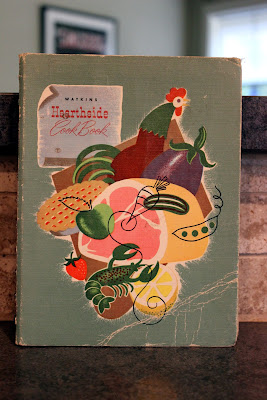 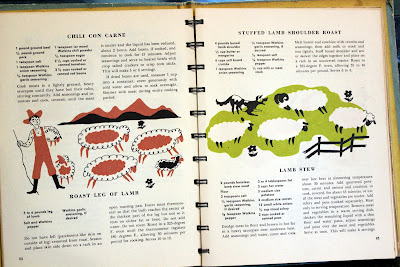 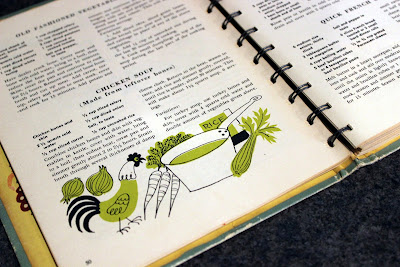 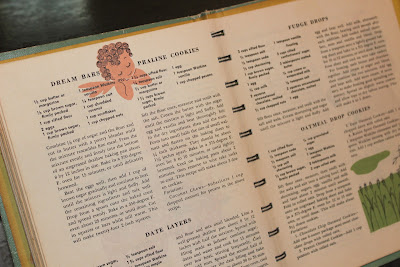 Directions
Preheat oven to 375F.
Sift the flour once, measure and resift with the salt.  Cream the butter with the sugar until the mixture is light and fluffy.  Add egg and vanilla and beat thoroughly.  Stir in the dry ingredients, then add the nuts.
Form into small balls the size of small walnuts and flatten on the baking sheet to 1/4" thickness.  They should be about 2 inches apart.  Bake at 375F for 8 to 10 minutes or until lightly browned.  Cool on baking pans about 2 minutes, then remove to wire cake racks to cool.  This recipe will make about 3 dozen cookies.
Posted by The Nostalgic Cook at 3:22 PM 2 comments: