This recipe comes from a pamphlet that Chambers published to promote the Thermobaker, which allows you to use the deep well as a small oven.  The Thermobaker is really just a heat shield that protects foods from the direct heat of the well burner, with the addition of a handle that lets you get the hot pans out easily.

The Thermobaker was introduced with the model C Chambers and had to be purchased separately, so they are a little hard to come by.  When we went to pick up a freebie Chambers cooktop (which is destined to one day be part of an outdoor cooking cart, aka the Great Outdoor Baconator), the guy asked me if I wanted "one of those pie baker thingies" that he had sitting in his garage.  I had to restrain myself from galumphing into his arms like an overgrown puppy.  I managed to mostly maintain my poker face and croaked out a subdued, "Yes," then screamed like a banshee when Farm Boy and I got back in the pickup.

Ahem.  Perhaps I need to get out more.


Mostly I use the Thermobaker to bake small cakes or pies because it adds no noticeable heat to the kitchen, which makes a big difference in our Texas summers.  However, I have been wanting to utilize it for more main dish or entire meal cooking.  Enter Creole Fish with Vegetables:

I used cod for the fish, because that is what we had in the freezer.  I replaced the garlic salt and basil with Howie's Cajun Dust, which a local Cajun restaurant keeps on the tables to sprinkle on the free coleslaw.  They sell the seasoning mix at the checkout, which I'm sure offsets the cost of the coleslaw!


Both Farm Boy and I really liked this.  I wasn't sure about fish cooked with such a large quantity of tomatoes, but it really worked.  I might go a little lighter on the celery next time, but that's just my own anti-celeryite tendencies showing.

Last summer my aunt pointed out Angel Pie in the 1950 Betty Crocker's Picture Cook Book and told me that I needed to try it.  I promptly forgot about it and didn't think of it again until we went grocery shopping last week and came home with a ridiculous amount of raspberries and strawberries.  The raspberries we managed to mostly consume during the week, but we still had an unopened giant container of strawberries when the weekend rolled around.  I thought of making an angel food cake to serve with them, but then remembered my aunt's recommendation of the meringue shell "pie".

While I have attempted a few meringue-topped pies, this was my first time to make a crunchy meringue.  I really liked it!  I think I could eat the meringue all by itself, without the berries and whipped cream.  (Farm Boy looked at me like I had lobsters crawling out of my ears when I said that - he says that the whipped cream is required.)

I'm assuming that any topping/filling that doesn't require baking could be used to make an angel pie, but the recipe does specifically call for a lemon curd filling. Perhaps I am committing meringue blasphemy by filling it with berries, but I think it is worth the risk. 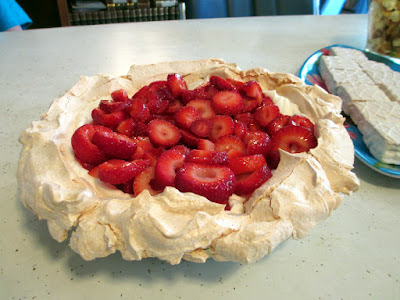 The one problem I encountered was that the meringue stuck to the pie pan.*  I think next time I will just mound the meringue onto a parchment-lined baking sheet and form a higher ridge around the edge to form the "bowl" shape, like the heart-shaped one in the recipe photo.  I think that would make serving it a lot easier and a lot less messy.

*Incidentally, I just noticed that the recipe calls for a 9" round layer pan instead of a pie dish.  I must have read this recipe 25 times and I missed that every time.

Preheat the oven to 275F.  Line a 9" round cake pan or a baking sheet with parchment paper.  Beat egg whites until stiff (holds a point).  Gradually beat in 1/2 cup sugar, then beat in remaining sugar, alternating with lemon juice. Continue beating until very stiff and glossy.  Spoon the meringue into the pie dish or onto the baking sheet into desired shape.  Bake until delicately browned and crusty, 60 minutes for one large meringue or 40 minutes for smaller, individual meringues.  Cool completely.

Fill with whipped cream or ice cream and fruit or pre-cooked filling of your choice, such as lemon curd.

Posted by The Nostalgic Cook at 1:24 PM 4 comments:

It has long been told in family lore how my mom used to make "mocha squares" when my oldest sister was a kid and everyone loved mocha squares.  Until Oldest Sister had an unfortunate bout of foodborn illness after eating chow mein and mocha squares.  After that, she refused to eat them ever again.

This was long, long before my time (let's see if Oldest Sister reads this...), so I had only heard of mocha squares, but never tasted them.  I asked Mom what they were and she described a vanilla cake with white frosting and peanuts.  Um, where is the chocolate?  Where is the coffee?  This made no sense to me.  Until I borrowed Mom's cookbook.

There in the tattered book was the recipe for mocha squares. 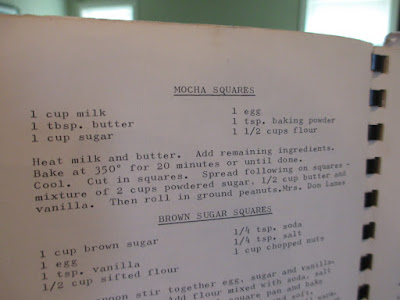 I did internet searches for mocha squares and found recipes for bars that involved chocolate and coffee, which is exactly what someone would expect from the name.  Finally, in desperation, I searched for "cake squares frosted peanuts" and saw that the rest of the world calls these peanut squares or peanut cake squares.  That makes so much more sense!

Because I am such a good sister, I whipped up a batch of so-called mocha squares to share with Oldest Sister at our weekly tea and crumpets.


They were fairly easy to make and tasted delicious while fresh.  I gleefully arranged them on a cute 1950s platter and drove them to my mother's house where I waited for Oldest Sister to arrive so I could tell her I made her most-hated food*.  And she had the nerve to not show up that day.  Drats, foiled again!

I think I will leave the recipe off this time because while these were quite delicious initially, the cake became... gummy... once refrigerated.  I think there is probably a better recipe for peanut squares out there.  I will try again sometime in the future because the combination of the sweet frosting and the salty peanuts was really nice.  I just didn't care much for this particular cake recipe.


*Lest anyone think that I am more evil than I really am, I have a similar story involving cherry pie with canned cherry pie filling, which I cannot stand to even smell to this day.  Oldest Sister has made several things with cherry pie filling, so this was an act of revenge, not outright aggression.  Too bad it didn't work out. <sigh>
Posted by The Nostalgic Cook at 10:00 AM 8 comments: 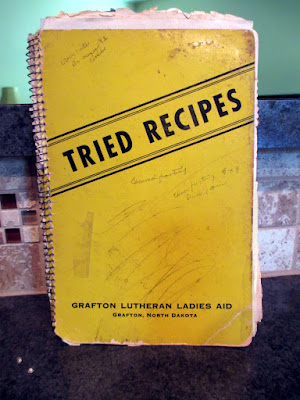 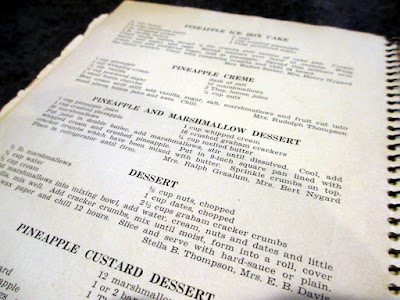 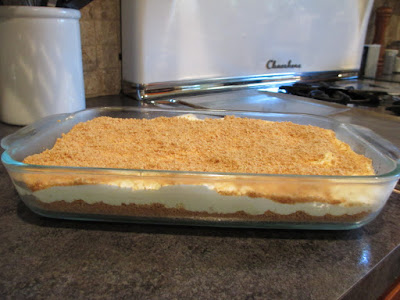 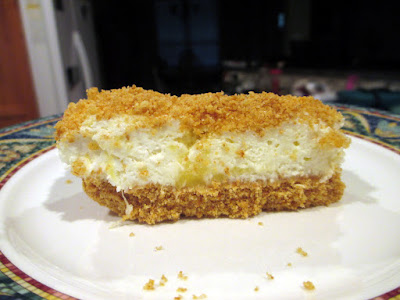 Ingredients
Directions
Put juice in double boiler, add marshmallows, stir until dissolved.  Cool, add whipped cream and crushed pineapple.  Put in 9" square pan lined with cracker crumbs which have been mixed with butter.  Sprinkle more crumbs on top.  Place in freezer until firm.
Posted by The Nostalgic Cook at 8:30 AM 2 comments:

This cookbook is a recent addition to the hoard.  After a few weeks of finding nothing on my treasure hunting outings, I was ecstatic to see a vintage cookbook at a reasonable price.  When I opened the book and saw a recipe for sweet potato pone - which I had recently read is supposed to be pronounced as, "poon"-  I knew it was going home with me. 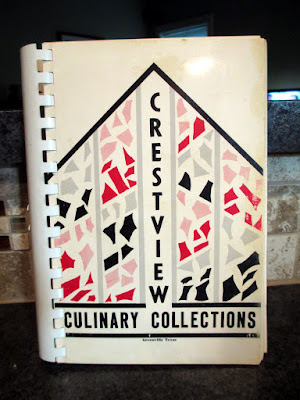 While thumbing through it, the recipe for baked onions caught my eye.  Farm Boy's mother used to make baked onions that were delicious (although I admit to being skeptical the first time she served me a whole onion...).  I hadn't thought about them in years, so when I came across this recipe, I decided it was time to bake onions again. 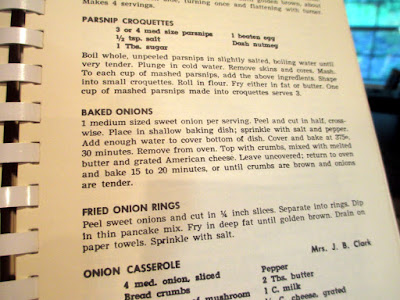 Alas, I didn't pay attention to the bit about cooking the onions first and then filling them.  I put the filling in and baked them with foil over the pan, then removed the foil for browning.  This resulted in a pan coated with really, really hard cooked cheese.  The onions were still delicious, but it required several soaks to get the pan clean.  The second time I made them, I buttered the dish first and added the cheese and bread crumbs only for the last 15 minutes of baking.  Much less mess!

It's nice to have baked onions back in our food rotation, especially when the locally grown sweet Noonday onions are available. Now I just have to not let them fall off my mental list again...

Preheat the oven to 375F.
Peel the onions.  Cut a small slice off the root ends, so that the onions will sit flat.  Cut the tops off and remove a cone-shaped piece from the inside of each onion.  Sprinkle the inside with the seasonings, then place the onion in a buttered oven-proof dish.  Place a top on the dish or cover with foil.  Bake for 30 minutes.
Remove the cover and fill each onion with grated cheese.  Top with buttered bread crumbs.  Bake, uncovered, for another 15 to 20 minutes, or until the cheese is melted and the bread crumbs are browned.
Posted by The Nostalgic Cook at 9:00 AM No comments: