I picked up a 1959 edition of the Farm Journal's Country Cookbook at an estate sale a couple of weeks ago.  The book looks to be unused, except for the potato section, which includes a note that reads, "I used this book for potato soup."


I had a few extra baked potatoes leftover from meatloaf night and rather than just reheat them as baked potatoes, I decided to make Lyonnaise potatoes. Well, I was originally just going to fry them, but 'Lyonnaise' sounds so much more impressive than 'fried taters'. 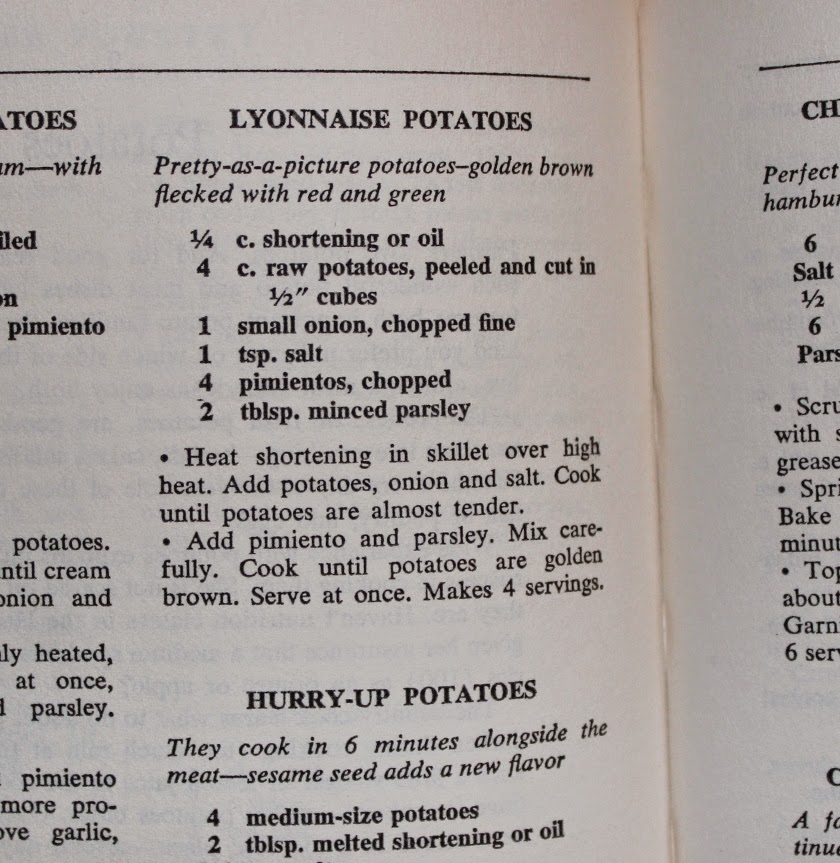 It wasn't until after I started chopping that I noticed that the potatoes were supposed to be raw. Oh well, it's just a head start, right? I also didn't have pimientos, but I did have Anaheim chiles from the garden, so I used those. And instead of shortening or oil, I used bacon grease (because I am from Texas). Aside from changing three ingredients out of six total, I followed the recipe exactly!

Directions:
Heat shortening in a skillet over high heat.  Add potatoes, onion and salt.  Cook until potatoes are almost tender.

Add pimiento and parsley.  Mix carefully.  Cook until potatoes are golden brown.  Serve at once.

Oh dear.  I had to edit this post after I published it because, much like Dan Quayle, I misspelled 'potatoes' in the title.  Oops!

Posted by The Nostalgic Cook at 1:40 PM