What's the next best thing to Pieathalon?  That's right, it's <switch to Keith Morrison's voice> MUR-DER!


Or rather, it's the Murder, She Wrote Cookalong!  Jenny over at Silver Screen Suppers is in the process of creating a Murder, She Wrote cookbook and invited everyone to play along by testing recipes from actors who appeared in the TV series.  After perusing the list of recipes, I chose Bill Brochtrup's Spanish Pork Picadillo because I knew if pork was involved, Farm Boy would be excited.  Plus, I like saying picadillo. 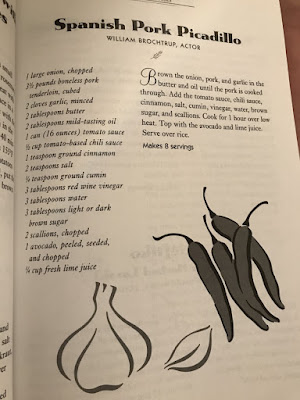 I didn't actually know who Bill Brochtrup was, so I had to look him up.  Apparently he is best known for a role on NYPD Blue, but he also made a couple of guest appearances on Murder, She Wrote.

Once again, Farm Boy, Sister of Farm Boy and Daughter of Sister of Farm Boy joined in for the taste test and everyone agreed that this recipe is a winner!  It was really easy to make and the house smelled incredible while it was cooking.  The cinnamon added a special flavor that everyone liked, but no one could guess what it was.  We had the leftover picadillo (see, still a fun word!) a few days later and it reheated very well.  We liked it so much that when we got down to the last serving, there was a little dispute over who got it...


* No Farm Boys were actually harmed during this cookalong.

Posted by The Nostalgic Cook at 7:30 AM