I have had a couple of Lodge skillets for close to twenty years, which have seen almost daily use. They have suffered through the abuses of new cast iron users not knowing how to care for them and forgetful people who walk away and leave them on a hot burner until the seasoning has burned off. My only complaint about them has been the weight, especially the larger skillet. My useless delicate racehorse wrists just can't reliably lift and tilt them.

After reading about the benefits of older cast iron (a smooth finish on the interior and lighter weight), I started watching for older pieces.  The prices on the cleaned and re-seasoned ones kept my cheapskate heart from buying them, but I have now purchased, stripped and seasoned three older pieces for myself: a square Wagner skillet, a small unmarked griddle and now a Griswold #8 (ten inch) skillet.  The Wagner skillet was in pretty decent shape to begin with, but both the griddle and the Griswold looked about like this:


The very first skillet I cleaned was a 1930s Lodge for my sister.  I didn't take before pictures, but it was pretty manky.  When I was able to cook eggs over-easy in it, I felt like it was ready to go to my sister's house.  I let it go... reluctantly.


While Farm Boy has promised to start working on an electrolysis tank, we currently don't have one available to use for cleaning.  I didn't relish the idea of throwing something so old into a fire or a self-cleaning oven cycle, so that left me with the oven cleaner method:  http://www.ibelieveicanfry.com/2010/12/reconditioning-re-seasoning-cast-iron.html


It took 8 sprays/soaks of oven cleaner to get most of the crud off of this poor skillet, then I had to carefully chip the rest off with the back side of a butter knife.  However, it was completely worth the effort.  I was worried that some of the rust that was visible on the outside might have left the iron pitted, but it was in remarkably good shape underneath.  The interior cooking surface is as smooth as glass: 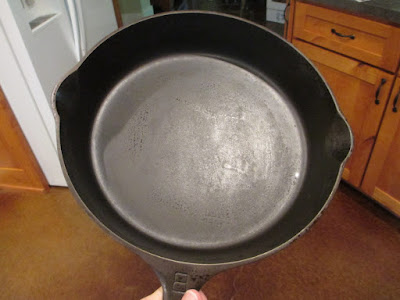 And the outside is in beautiful shape, as well. 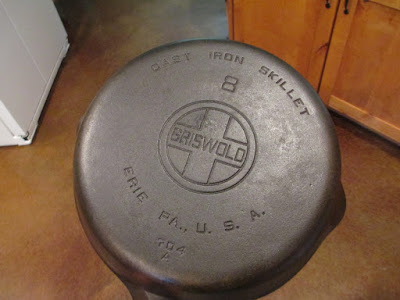 I haven't weighed it, but it is significantly lighter than my newer skillets and the smooth surface makes it much easier to season to a non-stick finish. It passed the eggs over-easy test with flying colors and has been working away in my kitchen for a couple of weeks now.  I am in love!
Posted by The Nostalgic Cook at 6:59 PM