Having never been in a sorority, I know nothing of Pi Beta Phi, but when I saw this adorable cover, I had to have the book.  Since then I have run into several copies at estate sales, some with red covers and some with blue covers.  Either Pi Beta Phi was prominent here in the 1930s or a lot of other people also thought the cover was cute.

One of the reasons I like old cookbooks is because I like to see what foods were popular in different eras.  This one contains the (in)famous Candle Salad, which has thankfully already been blogged about on many other sites so I don't feel compelled to make it.  Although I kind of still want to...

Giggle-inducing salad, aside, I did think this unfortunatly-named recipe looked promising: 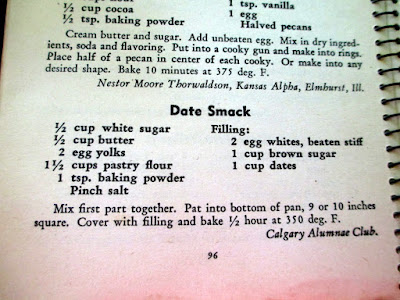 Despite having a name that conjures images of domestic violence, I was intrigued by the idea of something that sounded like a date-flavored meringue on a crust.

My hunch was correct - these bars are delicious!  The filling separates into a gooey center with a light crust on top and the combination of dates and brown sugar is quite nice.  If I were to change one thing about it, I would perhaps add a bit more salt to the crust, but I would be hesitant to change even that.

I apologize for the atrocious photo of the bars.  I forgot to take a picture when I served them and by the time I remembered, only one remained and it had been picked at a bit.  Even in its sad state, my mom called dibs on it.  Any time I return home with no leftovers, I consider that dish to be a success!

from the Pi Beta Phi Cook Book, 1936
Crust Ingredients
Topping ingredients:
Directions:
Preheat oven to 350F.
Combine butter and sugar.  Mix in egg yolks, followed by flour, baking powder and salt.  Press into bottom of a 9" square pan.  Fold brown sugar and dates into beaten egg whites.  Spread over crust.  Bake for 30 minutes.
Posted by The Nostalgic Cook at 8:47 AM