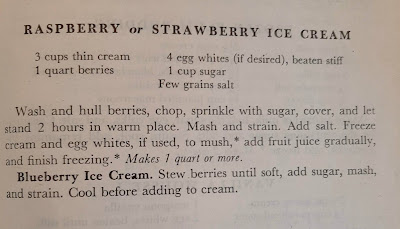 I opened this book first and was happy to see a really simple recipe.  I decided I didn't desire the egg whites, so I left them out.  I also misread the instructions and mashed the berries with the sugar at the first.  Since they released their juices so quickly, I only let it stand for about 30 minutes.

I would say this recipe makes significantly more than one quart.  My ice cream maker was almost full and I believe it has a two quart capacity.  It was still really soft, so we froze it in a container for a couple of hours.  Even then, it was softer than Farm Boy likes, but I thought it was just right for homemade ice cream. 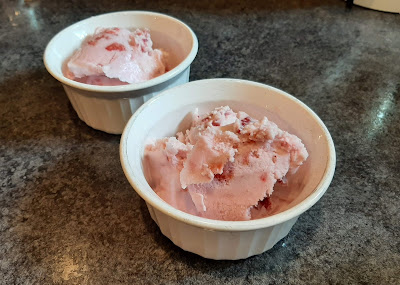 Final result?  Delicious!  There is no vanilla to compete with the strawberries, so it is a full-on strawberry flavor.  After two hours in the freezer, it was the consistency of a soft-serve custard.  By the next night, however, it was rock hard, and the strawberries were little icicles that froze my teeth.  So I would recommend letting it sit out for a bit to soften slightly, if you're trying to keep it for more than one day.

Posted by The Nostalgic Cook at 3:29 PM