I first made this pie a little over four years ago.  We really liked it, so of course I promptly forgot which cookbook it was in.  I had shared a photo of it, so it popped up in my memories every year, punishing me for my forgetfulness.  However, a few days ago I was going through some old photos and saw not only the picture of the pie, but a picture of the recipe and the cookbook, too.  Hooray! 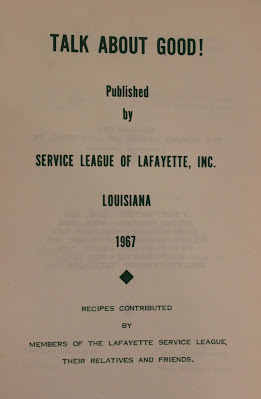 I found this cookbook at an antique store several years ago.  I picked up up, carried it around, put it back, left, drove back the next day and bought it.  My copy is the 1967 edition (printed in 1971), but according to the Junior League of Lafayette's website, it is still in print and available for purchase more than 50 years later! 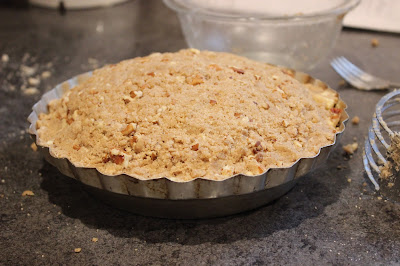 Because I am a Chambers nerd, I chose to bake it in the Thermobaker in the Thermowell.  With the well preheated for a few minutes, you can bake an 8" pie with about 15 minutes of gas, then 30 to 40 minutes of retained heat cooking.  Have I ever mentioned that I adore this stove?  Oh, I have?  Sorry!

I was too impatient to wait for it to cool, so my servings were not very photogenic, but it was as tasty as I remembered!  I would say it's closer to a crisp or a cobbler than a pie, since there is no bottom crust.  It is fairly sweet, too, so perhaps the sugar could be cut back a bit or maybe serve it with whipped cream to buffer it a little.  But the combination of the crunchy brown sugar topping and the clear apple flavor of the filling really work well together, so I will be making this again in the future now that I have rediscovered the recipe.
Posted by The Nostalgic Cook at 4:19 PM