A few weeks ago I was thumbing through some cookbooks looking for recipes for fresh corn when I stumbled upon this gem: 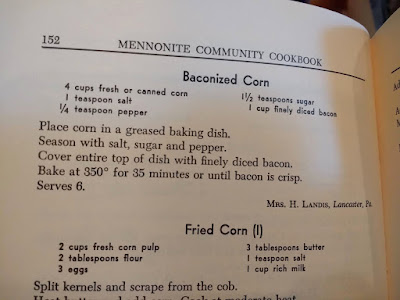 Baconized?  I didn't realize it was a thing to baconize foods, but I have to think almost anything could be made better by the baconizing process!

The recipe was found in the Mennonite Community Cookbook by Mary Emma Showalter (1950). 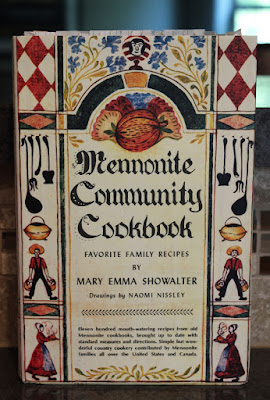 I didn't have any bacon that particular day, but I did make a note to try some baconized corn in the near future. The future is here.

I followed the recipe exactly as written (crazy, right?).  I cut the corn off the cobs and mixed it with sugar, salt and pepper.  Placed it in a buttered casserole dish and topped it with diced bacon.  Easy peasy.  I did have to bake it slightly longer than the recipe called for, but my bacon was probably not "finely" diced.

For such a simple process, this was really good.  I think the key is the fresh corn, which came out very tender and corn-y.  I think the skin on frozen corn would be a touch on the leathery side.  Canned might work, but it's not something I usually have on hand.  We had a little bit leftover, which I mixed into some cornmeal pancakes the next day.  Which sounds odd, but it worked.

from the Mennonite Community Cookbook by Mary Emma Showalter (1950)

Directions
Place corn in a greased baking dish.  Season with salt, sugar and pepper.  Cover entire top of dish with finely diced bacon.  Bake at 350F for 35 minutes or until bacon is crisp.  Serves 6.

Posted by The Nostalgic Cook at 4:12 PM