Last Thursday I had lunch out with my mother and one of my sisters.  Dessert was included, so I made a beeline toward what I thought was apple crisp, but turned out to be bread pudding.  Don't get me wrong, I love bread pudding, but since I had already set my taste buds for apple crisp, I was sorely disappointed.  So disappointed that I sought solace from the chocolate pie instead.

On Saturday I noticed that the Granny Smith apples in the crisper were not quite as crisp as they had once been, which made me think I should bake something with apples.  That decision was heavily influenced by the Thursday of Apple Crisp Despair, I am sure.

I turned to Baking with Brother Boniface (1997) for inspiration.  I hate to think that a book from 1997 might be considered vintage, but I'm going to cheat a little here by pointing out the cover photo: both the tree and Brother Boniface would definitely qualify. 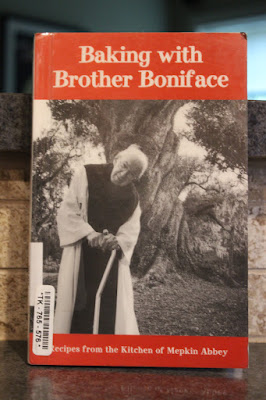 This is a nice little baking book with mostly-from-scratch recipes (there are a few that call for cake mixes) ranging from the very simple, like this apple crisp, to more challenging recipes such as the Mepkin Abbey Cinnamon Buns.  The recipes use ingredients that are easy to obtain and the instructions are clear without being overwhelming.  I think it would be a great book for someone just learning to bake.

Now on to the crisp! 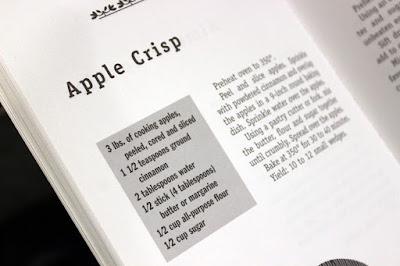 Mmm-mmm!  This really hit the spot!  The only things I would do differently next time would be to make sure I have some vanilla ice cream on hand to serve with it.

adapted from Baking with Brother Boniface, Recipes from the Kitchen of Mepkin Abbey, 1997
Ingredients

Directions
Preheat oven to 350F.  Grease a 9-inch round baking pan.
Toss apples with lemon juice and water.  Place in the prepared pan and sprinkle with 1/2 teaspoon cinnamon.  Using a pastry cutter or fork, mix the butter, flour, sugar, oats and remaining cinnamon together until crumbly.  Spread over the apples.
Bake at 350F for 30 to 40 minutes.  Serve warm with whipped cream or ice cream, if desired.
Posted by The Nostalgic Cook at 11:14 AM